A writer friend of mine recently shared this slideshow that offers tidbits from the collection Why We Write: 20 Acclaimed Authors on How and Why They Do What They Do. In the slideshow were several pearls of wisdom, but Susan Orlean’s quote is what I’d like to address today:

“Wanting to be a writer is a huge percentage of what makes you be one. You have to want to do it really badly. You have to feel that’s what you’re supposed to be doing.”

That’s sure easy for a published author and New Yorker staff writer to say.

I originally thought this post was going to be about how reassured I felt by Orlean’s words—how I know now that I’m really a writer, because I want it so badly. I thought I was going to talk about how we can’t base our success on how much someone pays for our work.

And then I realized: that’s bullshit. Bullshit that I keep saying, because others keep saying it. So, one poor writer to another, let’s dispense with hollow platitudes for a moment.

The Orlean quote reminded me of a Saturday Night Live sketch from the 2008 election season, when Hillary was officially out of the running and Palin was the VP nominee for the GOP. 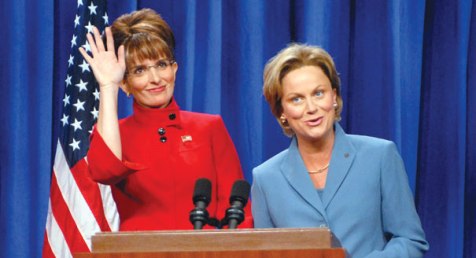 FEY AS PALIN: It just goes to show that anyone can be President. …All you have to do is want it.

POEHLER AS CLINTON: (LAUGHS) Yeah, you know, Sarah, looking back, if I could change one thing, I should have wanted it more.

The idea that “all you have to do is want to be a writer and you are one” falls in the same category as “anyone can succeed in America” and “you’re guaranteed a job with a college degree.” They are delusions that people with money keep perpetuating, to the continued frustration of hardworking have-nots: are we not trying hard enough? Do we not want it bad enough?

I know Orlean isn’t saying that “if you want it enough, you’ll be a successful writer and make a boatload of cash.” She’s saying, “if you want it, you already are a writer.” But this means next to nothing in the land of capitalism, household bills, and student loans.

There was a time when writers could make a living for themselves on their talents alone; they didn’t live like royalty, but they got by. But this age of freelancing and adjuncting and the ever-shrinking list of periodicals that publish and pay for original work, especially from emerging writers without a platform, makes that whole “I write for a living” thing seem pretty impossible. Very few places are able (read: willing) to pay writers a living wage, leaving us to piece together a full-time, zero-benefits schedule between community colleges and jobs off Craigslist. And who has the desire to do anything but sleep at the end of that kind of day?

I’m not going to feed you a line of bull that this life is easy or that it even feels worth the trouble every day. Sure, it’s important to believe in yourself. And, yes, even without any viable prospect for a life in which my writing pays for itself, I will continue to write and continue to try. But the longer we deny that money  matters, that being well compensated for our work is as important as the act of creating it is, I don’t see the landscape changing in our favor.

…And in honor of the Ladies of SNL theme: This post was brought to you by Debbie Downer. Womp womp.

Last night, my wife and I were talking about writing. Given that I am a writer, you may think this kind of thing happens pretty regularly.

You would be wrong. And so was I, in at least one way.

The conversation began as a discussion of What Writers Talk About. For her, in most cases, the stuff we say to one another isn’t all that interesting; as a reader, she wants to know the What–the subject of our work–and all we seem to talk about is the How: the process, the edits, the self-loathing and general despair. As a result, we then turned toward the Why: why don’t we talk more about what we’re actually writing?

If you can believe it (as you should, from reading this blog), my response was: fear. A fear that my idea will be found wanting, or that the listener won’t understand the concept, or that my explanation will outshine the work itself: that someone will find out that I’m not really a writer at all. Instead of telling, I keep it inside, thinking I’m the only one who can understand, until everything is perfect and ready to be shared.

But it’s funny: as soon as I started talking to a non-writer about the What, I wanted to keep talking. I confessed that I haven’t touched my novel since January, because I’m scared of the hard parts (file under: Crying While Writing). I told her that the ideas are there, ready to be written, but putting my fingers to the keys brings everything back so clearly that hiding seems so much better of an idea. I mentioned the raw-beyond-raw short story that’s been slowly growing momentum since last summer, and not in terms of abstract ideas. I told her the plot. The What. I suddenly wanted to read it to her; it was the craziest thing. In telling her the What, I had given her advance access to the fledgling world I was creating. It made me want to take her even further down into it.

Why on earth had I waited? Did I think she was going to knock around inside the new world like a proverbial bull? That she would peek behind the scenes, tell me my seams were showing? Sharing even this greenest part of my writing got me excited to write again. Rapture replaced fear, and I read her the opening scene. My brain buzzed the rest of the night with new ideas spawned from our conversation and the simple act of reading words aloud.

I realized then that, while I sometimes told myself that I didn’t share my stuff with non-writers because they wouldn’t understand or I feared they would take it personally, the real reason was that I didn’t think it was worth sharing–that it needed to get to some enlightened, pristine level before anyone who didn’t fully understand the process could read it. I’ve squandered years on this kind of doubt, all while an incredible source of encouragement and feedback sat two feet from me on the couch, wanting to be let in.

We need readers; I know that writers always say that. But we don’t need them just to read. We need them to listen, even in the earliest stages. If you have a reader in your life who you’ve been afraid to let into the deeper levels of your writing life, just do it. Today. No matter how scary it seems. Tell them everything.